(FREE; iPhone and iPad-compatible) This is a cool project from NASA's Jet Propulsion Laboratory and the California Institute of Technology, and I include it here as a good technology demonstration of the possibilities of "augmented reality."

After printing a paper "target," the user loads one of the elaborate 3D models of a NASA spacecraft (including the Spirit and Opportunity Mars rovers, Grail and Cassini spacecraft, and the Hubble Space Telescope). When the camera of your iPhone, iPad or iPod touch is pointed at the paper target, a 3D model of the selected spacecraft is superimposed over the camera view. Using your device's internal accelerometers and compass, the app allows you to move around, under and even through the model, as though it were in the environment with you.

(Spacecraft 3D)
Posted by Ellsworth at 3:30 PM No comments:

($0.99; no iPad-specific version) Ever wake up two hours too early feeling alert and rested, then go back to sleep and feel terrible two hours later? Thirty years ago, I proposed an alarm clock that would wake you at the appropriate place in a REM (Rapid Eye Movement) sleep cycle.

Sleep Cycle attempts to do exactly what I proposed, monitoring your activity while you sleep using the phone's accelerometer, and establishing a pattern to your sleeping. It then wakes you before your target waking time when you are naturally becoming less deeply asleep.

For Sleep Cycle to detect your activity, you do have to have your phone in bed with you, and because the phone is actually running the app all night, it also must be plugged in to a power source. The instructions advise that the phone be placed under the sheet on the mattress, but I've had a pouch clamped to the headboard that has worked well. A nice feature is that the snooze is activated by simply moving the phone.

Does it work? It's hard to say with certainty, even after using this as my exclusive alarm clock for almost two years. Sleep Cycle does have a nice, gentle and progressive alarm sound, and that may be as important to gently waking you as your REM state. 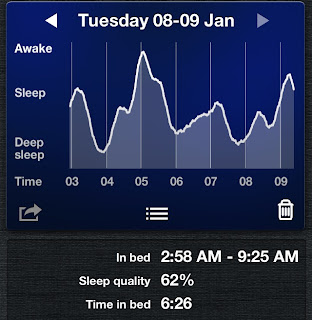 A compelling aspect of Waze is that it is "community-based." That is, it uses information gathered from Waze users to create a picture of the current traffic conditions. It even uses users to create maps. If you drive on a road on which no Waze user has ever driven, you may actually "create" new map data (you'll be rewarded with a Pac-Man-like animation as you "munch" new territory. Waze aggregates this data to create their map database, along with other sources.

Waze also lets users report traffic problems and even chat with other Waze users (though I'm not sure why). Like Google, Waze also (anonymously) analyzes the speeds of all of its users to identify traffic flow patterns.

Waze rewards user-contributed input - including simply using the system - with a points system.

(Waze)
Posted by Ellsworth at 7:32 PM No comments:

(Free) As I write this in early January 2013, this app is still in version 1.0.0.3977, having been rushed into existence by Google following the debacle that was the release of Apple's Maps app in iOS 6, and the exclusion of the original Google Maps app for iOS which had debuted with the iPhone in 2007.

For a v1.0 application, the new Google Maps is polished and slick. However, it's far from perfect, or even good.

In attempting to make the new app represent the new "look and feel" of Google's Web apps, Google has sacrificed some usability. Considering that this is intended to be an automobile navigation solution, the text could be more legible at dashboard distance. While in motion, critical on-screen buttons should be BIG and easily identified - they're not. Users can't rename or sort saved destinations (actually, I discovered that you can find and edit your saved destinations in your Google Bookmarks, but not without some difficulty).

When Google adds their voice search functionality to this app, it will become significantly more useful.

It's a good start, but it's still not replacing our dedicated GPS navigation systems.

(Google Maps)
Posted by Ellsworth at 7:31 PM No comments:

The options for visualization are impressive, and the feature-set is ambitious. I wish there were a way of importing artwork from an external source, and that you could create a Bezier-curve based drawing rather than "painted" sketches to create models, but it's all great fun.

I made this demonstration video to show some friends the app. The models are all mine, and the big titles were superimposed in another piece of video-editing software:

The higher-priced versions feature more visualization options, and the ability to load and save previously-made models.

Posted by Ellsworth at 6:50 PM No comments:

(Free) The "PTT" in the name of this app stands for "Push To Talk." This free app uses your Internet connection to send voice and text communications to other Voxer users.

The important part of a PTT communication system is that it's asynchronous voice communication. So unlike a phone call, and like using a two-way radio, you take turns talking. Why would you want to do this? Because there are times when the person you wish to communicate with can't take a phone call. And because there are times - as when you're operating a motor vehicle - that you can't read or type text messages. With Voxer, you press the button and talk. Within a few seconds, the person(s) to which you directed the voice message receives an alert that they've received a new message. When they tap on the message, they hear your voice. They can then send you a response by pressing their on-screen button and replying (or type a text message in Voxer).

But wait, there's more: The REAL power of a network-based PTT system is that you could talk to all 35 people in your nationwide sales force and say, "Hey, who's got the D134 samples we had in Vegas last week?" Within seconds, all 35 addressees in your predefined "Sales" group can hear the message (some who are in meetings or in-flight might not hear the message for minutes or hours), and only the one who knows the answer can either respond directly to you, or answer so the entire group knows. That's far more effective than 35 phone calls or emails. On a smaller scale, you could tell your family members you're on the way home, and wherever they are, they'd all know at once and be able to chime in about rendezvousing at home.

Try it. You might never make another phone call.

(UPDATE 11/18/2015) Apple brought asynchronous voice messaging to their Messages app, but it's a bit awkward to use. And something that's still uniquely useful about Voxer is that it can be configured to automatically play incoming voice messages on your phone's speaker without requiring any other action (so you can be driving a vehicle just hear the response come in without having to look for an on-screen "play" button. I gotten out of the habit of using Voxer, perhaps because most people prefer to just send text-only messages, and because I now tend to compose text messages by voice using Siri, but for some people Voxer still presents a nice communications tool, especially for the one-to-many broadcasting model.
Posted by Ellsworth at 6:33 PM No comments:

($1.99) This app promises to perform paper document scanning using your mobile device's built-in camera. To that end, it performs admirably.

In practice, you take a photo, and TurboScan automatically attempts to correct any "keystone" distortion caused by taking the photo off-axis (which is often necessary to avoid reflections from lights). It then converts the image to a high-contrast document (you can optionally choose to save it as a full-color photograph) which you can save, email or export as a PDF or JPEG file. Using the "Open PDF in..." option, we choose upload scanned documents directly to our online DropBox account by choosing the DropBox app.

Quality of the resulting "scans" is remarkable (we're using iPhone 4 cameras - 4s/5 cameras would be even better, and TurboScan warns that 3/3G/3GS and iPod touch cameras produce inferior quality images) - better than a photocopier of yesterday.

(TurboScan)
Posted by Ellsworth at 6:21 PM No comments: